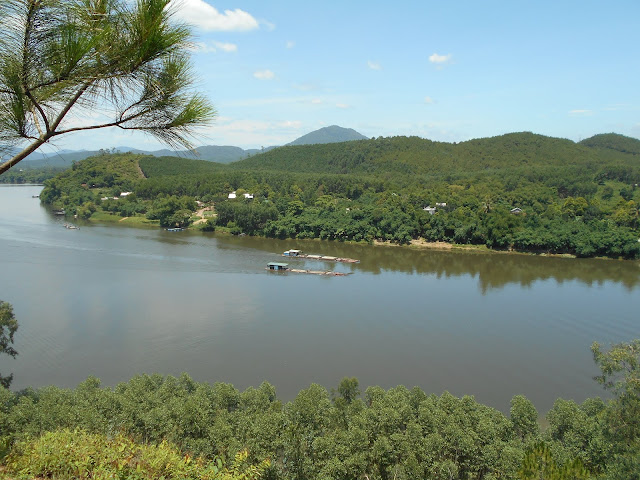 I thought my eyes were playing tricks on me but the decks on barge closest, is actually underwater.

This hilltop overlooks the Perfume River. The birds were singing and the butterflies were flitting between the trees. Such tranquility, it is hard to credit the brutal history of the place. If it were me with a Kalashnikov or an M - 16 i would have just put it down and had a snooze. What was the point of it all?

Before I met with Old Mate and his family I wanted to go on a bit of a tour of Vietnam to get used to the vibe. I chose a trip with G Adventures who were just amazing. The tour guide was top notch. I told him I was a Tour Guide myself and I would be asking a lot of questions so he deserved to know why.

At the end of the tour I absolutely blitzed his customer feedback form with ticks. I gave him a very generous tip. There was nothing i could suggest he could do to improve his performance. He took on incredible tasks. He would often let us all just wander off to do our own thing. I would be terrified to do that. He did it and monitored us all as individuals. He was an education. A totally class act.

A note on tipping. Supposedly tipping is not necessary in Vietnam. I beg to differ. It is polite to give money in a card as a gift to begin a interaction then do the same afterward to say "thank you". Never look at the money until you are alone. Never wait for the shopkeep to make change.
Posted by Mark Bolton at 8:19 PM